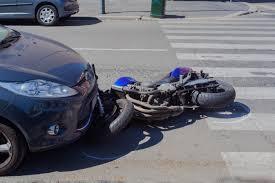 When a passenger vehicle and motorcycle collide, the auto accident is often fatal for the motorcycle rider. As a result, substantial compensation may be available to the survivors.

Authorities quickly blamed a motorcycle rider for a fatal auto accident in High Point. But was it really his fault?

The wreck occurred in front of a fast-food restaurant near the intersection of Eastchester Drive and Johnson Street. Investigators concluded that the 24-year-old rider was traveling at a high rate of speed. Therefore, the other driver, 21-year-old Curtis Diaz, did not see the Yamaha. The, unnamed, rider was rushed to a nearby hospital with serious injuries; where he later died.

Mr. Diaz was cited for driving without insurance and displaying an invalid license plate.

One-sided motorcycle auto accident reports are a good example. Since the victim in the above story died, the reporting officers only heard one side of the story. Furthermore, there is a feeling among many North Carolinians that motorcycle riders are reckless people who commonly ignore traffic laws.

But the facts may be a lot different. Around a third  fatal motorcycle crashes in North Carolina are visibility-related crashes. They often happen when the tortfeasor (negligent driver) attempts a left turn against traffic. Most riders who have gone down can vouch for that fact.

Many times, the tortfeasor said something like “I never even saw you” or “You came out of nowhere.” Sometimes, through no fault of the motorcycle rider, the motorist was simply not lo was not looking for bikers.

With no victim statement, an attorney must look for other sources of evidence. Some of these sources include:

Other Witness Statements: First responders only talk to witnesses who voluntarily come forward at the crash scene. There are usually other people who also witnessed part of the crash. Their stories are vital.

Event Data Recorder: Most vehicles have EDRs. These gadgets are like the black boxes in commercial jets. An attorney can use an EDR to conclusively establish vehicle speed and steering angle, instead of relying on witness recollection.

Every factor is important in an auto accident case because the victim/plaintiff must establish liability by a preponderance of the evidence (more likely than not). Contact us today at (336) 882-4300 to schedule your free consultation.